In this exercise, we will learn about Adobe Lightroom Classic Minimal vs. One-to-One Previews. 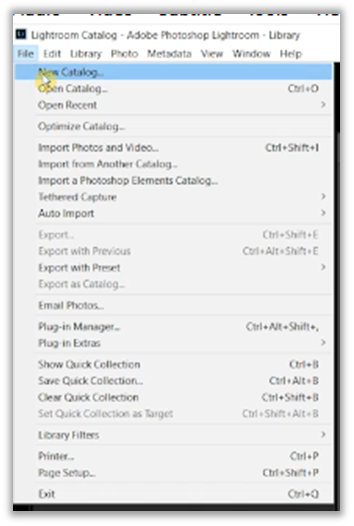 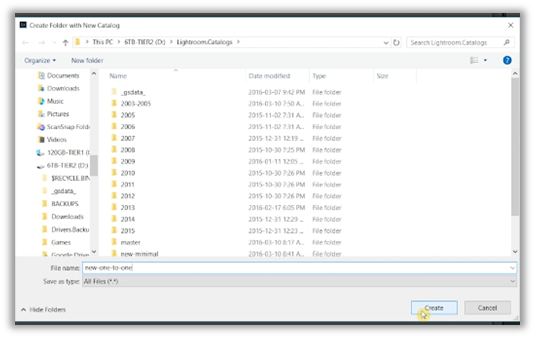 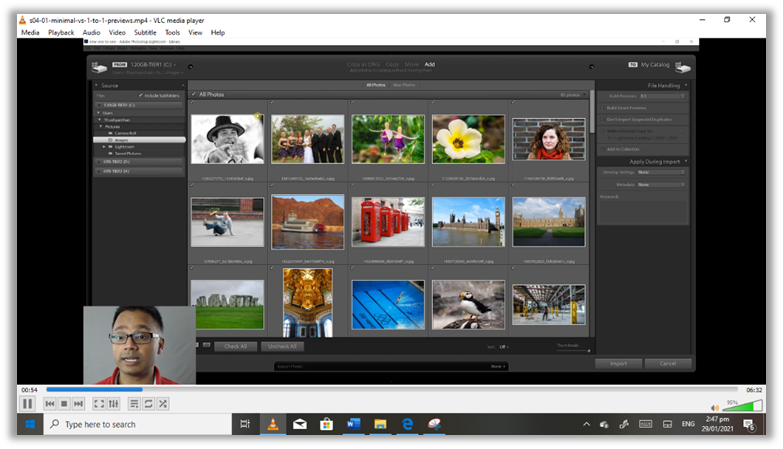 Now since this is a new catalog, Lightroom has no idea of what those images are. So it's going to check out the same 82 different photos. This time, instead of minimal previews like before, I'm going to create one-to-one previews to give you an idea of the time it takes and the processing power. 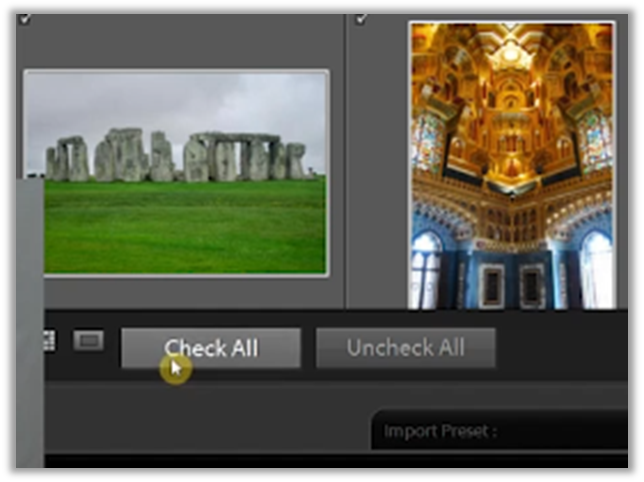 It is enabled by default, so I don't have to worry about that. I'm going to go ahead and click import. 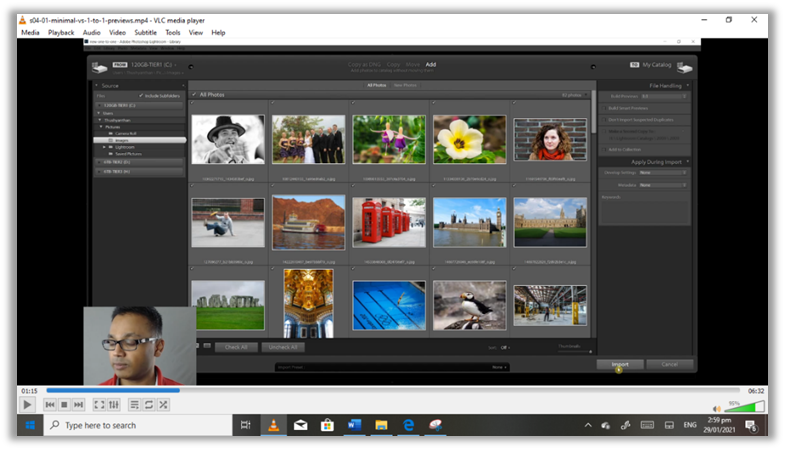 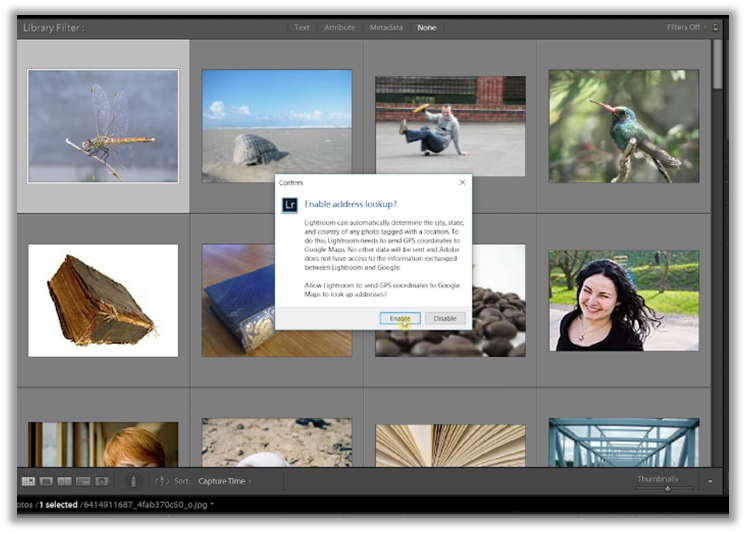 If you remember, the last time we did it in the minimal previews, it went by quickly. But this time, it's taking just a bit more time. I'm going to give it a few more minutes and wait until it's done. Now, this build process will go faster or slower, depending on how fast your hard drives are. So if you have SSD drives, it's going to go a lot faster. It's also going to go more quickly, depending on how fast your CPU is, how many cores it has, and whether or not it's hyperthreaded. So it's almost done with building all the 82 previews. Once that's done, I'll show you what I mean by the file sizes. Great, it says task completed.

So all 82 previews are done. And this is just a bit of information about the address lookup. So here is our new one-to-one catalog, with all the previews at one to one. This is what I mean. So when you go ahead and open it up, you'll notice that this is not a good photo when I zoom into the photo.

But when I zoom into the photo, you can see that it does it very quickly. It doesn't have to do much rendering. This is what I mean. 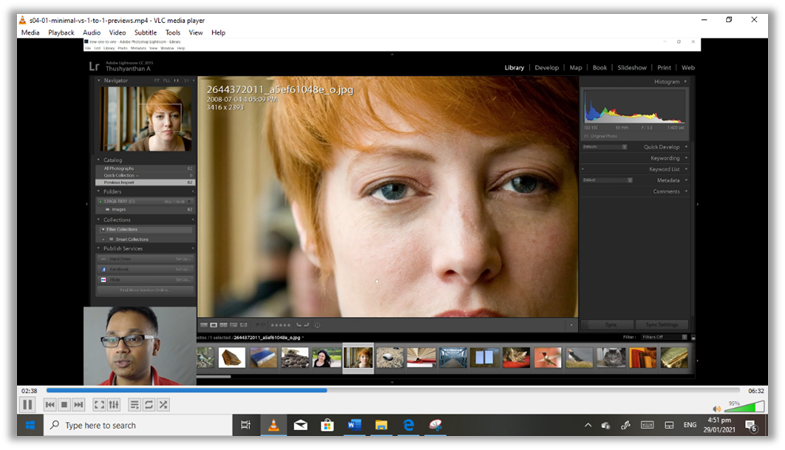 By default, it has already built the one-to-one preview so that when I zoom into a photo, I don't have to wait for it to zoom in and create a new preview for that while it's zooming in. Now I'm just going to spend just a couple of moments to show you what I mean by the file sizes. You notice that I like to put all of my Lightroom catalogs under their folder to have a good idea of the catalogs. Each of these file folders is a catalog. We just recently created this one-to-one, and then we recently also created the minimal catalog. 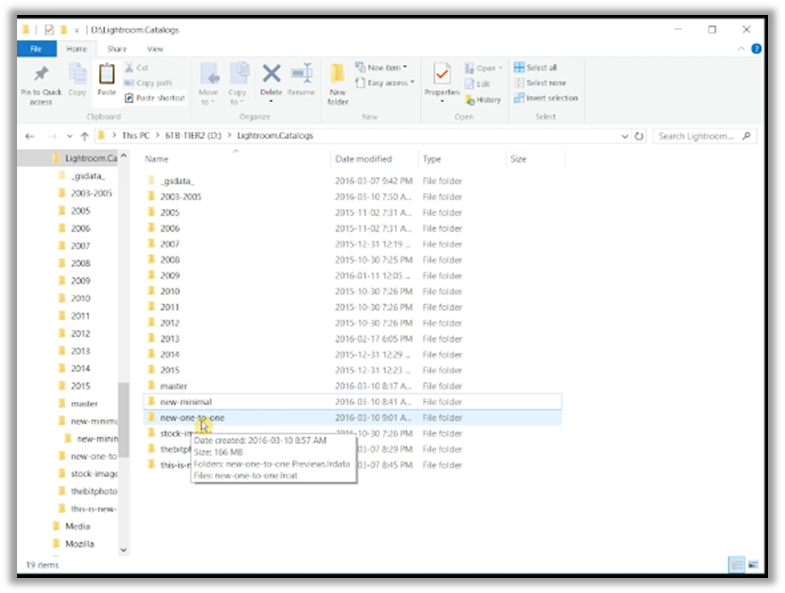 So let's go ahead and take a look at what I mean. This is the catalog here. And the catalog is given the extension LRC 80. So it is a Lightroom catalog.

You can see that its file size, it's only about 2.5MB, maybe even 2MB, and that's with the 82 photos that we added. You will see also with the one-to-one LR cat; it's still the same size.

So in terms of catalog sizes, it's not that big. It does get big in terms of file sizes and is actually in the previews that it generates. So if I go ahead and give it properties here, you can see that the one-to-one previews that I built are 164 megabytes with 84 files in 98 folders. 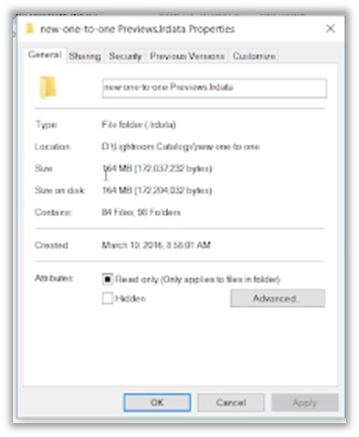 So this is its internal cataloging system for creating previews. So keep a note of the file size, which is 164. Meg's, and this is for the one-to-one preview. Now let's take a look at the minimal previews. We'll go ahead and create and pick up the properties. You can see it's 23.7 megabytes. 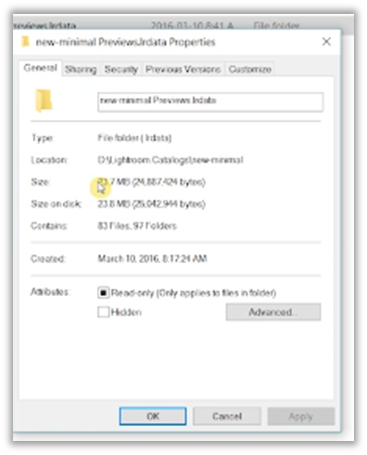 So it's quite a lot smaller in terms of file sizes. Now, these previews will be added continually as you zoom in, as Lightroom understands it to create a new one-to-one preview and so on. So the number of previews that you're going to have here in terms of file size will continue to grow. Now I want to show you what I mean by the zoom level's size. We're still in the one-to-one catalog, which was the most recent one we open. Let's go ahead and open the minimal one. It just shows you what I'm talking about. Give it a few moments to open up. Now in that one picture of this young lady here. When we took a look at her, and when we zoomed in, it zoomed in right away. Now I'm going to show you this one has not been created with a one-to-one preview. But when I zoom in, you'll notice that there is some processing behind the scenes. It's creating that one-to-one preview as needed. So you'll see that it was loading just a little bit, even though my computer is quite fast. 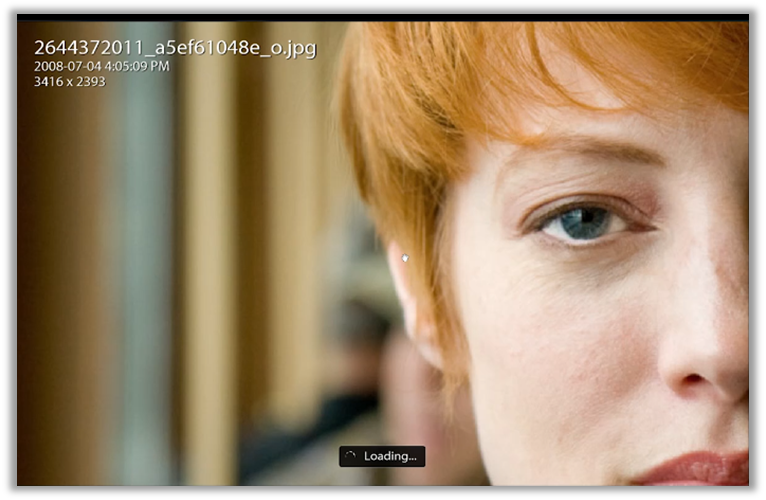 When one-to-one previews are already pre-generated, they speed up time, especially when you're working with maybe hundreds, maybe even 1000s of different photos. You can quickly get to the highest zoom level, work with all of the things you need to work with and work with your creative process.

So, I hope this has been helpful to give you an idea of what it means to work with minimal previews versus one-to-one previews. The trade-off time to generate all those previews and the other trade-off is the amount of hard drive space required to store all of the one-to-one previews. Eventually, depending on how well you do things, you will prefer one set of previews. Personally, as I mentioned before, I like to ingest all the photos, add them to the catalog and add them with one-to-one preview so that when I get to work with processing all the photos, I can do it very, very quickly. So once again, I hope this has been helpful. If you have any questions, please don't hesitate to post and reach out, and I will be there as a source of support.